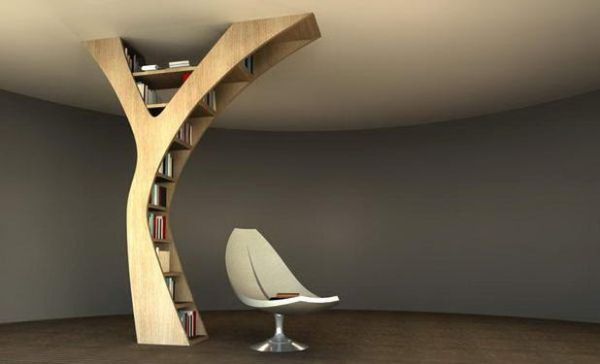 A bookshelf is one of the most common furniture pieces in an office or home.A bookshelf makes the best use of a wall and systemizesstorage ofbooks, files, documents that would otherwise occupy a lot of space. Simple shelf style bookshelves are quite monotonous and a creative design adds to the beauty of the room. Various designs have been created in the Tree bookshelf category so far, each one is interesting in itself.

The Tree branch bookshelf is made in three different shades, natural oak, American walnut and black wood. The brain behind this tree branch bookshelf Olivier Dolle is a French designer. The branch appears to come out from the adjoining wall and aligns horizontally on therear wall. It is big enough to hold several books and even small articles. This bookshelf is intelligently designed as it extends horizontally on the wall a piece of furniture like a table or a couch may be placed beneath it.

Mother Nature is the best creator and no human creation can match thebrilliance of nature.In fact, several man made designs are inspired from nature itself.A natural tree branch inclined sideways and sturdy enough to hold a few books will do the trick. Although,it is not much of a storage solution rather a designer bookshelf on the wall. The branch can be painted or polished as per the choice of the individual.

This one is also a children’s tree bookshelf, though the design of the bookshelf is unique in itself.This tree bookshelf has several shelves arranged at multiple levels, and attached to the tree shaped 18 mm thick MDF figure. At the base of the tree is a stand to erect the bookshelf and also there is arrangement to screw the tree to the wall. This bookshelf is made in Belgium and is available in more than 20 singlecolors. The depth of the shelf is 24 cm and the overall dimensions are L122cm x W55cm x H182cm.

A tree shaped bookshelf is a stylish design concept with a use in our daily lives. Designs inspired from nature like this one have a unique charm of their own.

Improve the look of your home with...

High-tech gadgets for your home

Simple yet amazing ways you can restore...