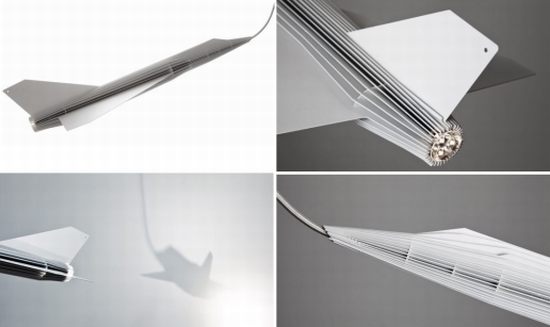 The Power of Light – Mirage III

One of the favorite childhood memories for most people is making a paper airplane and the same turned out to be the source of inspiration for Swiss product designer Francis Chabloz for his newest project titled “The Power of Light – Mirage III”. The suspended lighting fixture reminds us of the Mirage III, the famous and successful supersonic fighter aircraft designed by Dassault Aviation during the mid-‘50s. It took the designer two and a half weeks to complete the piece, which has been designed for the “Almost White” Galerie d’(A) in Lausanne.

Based on Action – Reaction – Postcombustion, the “The Power of Light – Mirage III” also pays tribute to light and technology with the use powerLEDs. Each lamp comes numbered, dated and signed. Francis Chabloz has earlier impressed the design lovers with Shark, Pistil vase, The Aquarium and Transformers.

Bring in the affordable industrial designs for...

Reasons why you should choose cellular shades...