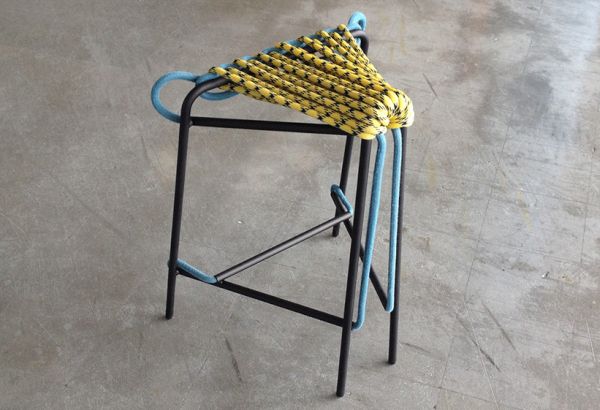 The stools are designed in such a way that you feel sitting on a saddle and hence the name Pony was adopted for the furniture pieces. The designer wanted to create a portable solution for sitting upright and working.

He noticed that there were miles of climbing rope discarded soon after there being in use. In some cases, it was seen that ropes were declared unsafe even after six months of their use. Ending up in landfills is threatening for the environment as well. Utilizing such material not only does a favor to the environment but also helps in creating pieces of aesthetic beauty.

The benefits of sitting upright

The fact has been scientifically backed by several researchers that sitting upright increases productivity. The importance of sitting in a correct posture is probably more than you thought.According to the results of the experiments conducted by Erik Peper, a behavioral scientist from Holland, sitting up straight renders positive effects.The likeliness of positive thinking is more in an upright position.

In another study, by the researches of Harvard and Columbia Universities it was discovered that posture produces a profound effect on thinking and decision making.Sitting upright helps one cope with stress, as per the research of the Auckland University.Sang A Choi definitely thought deeply before designing his stools.

The design and the aesthetics

Colorful ropes winding through and on steel pipes look pretty artistic. “The seat looks like a cow’s head and its ears are handles so that you can grab and move the stool easily,” says Choi.The rope on the frame creates a shape of the seat such that it appears like a saddle. In one of the stools a carabiner is used to the join the two ends of the rope that looks amazing. The steel frame is colorful too, the ropes compliment the frame and vice versa. The rope goes through the steel pipes, giving a false impression that the rope supports the structure. The designer has also considered the fact that the stool frame may be shipped without the rope and the user may attach the rope on his own.

The Pony stools can easily be shifted between your living room, kitchen and patio. Giving you a comfortable sitting and enhance the beauty of your surroundings. Sit upright on the Pony stool and make positive decisions.

Manual Stool by ALLT is all about...

Bring in the element of style to...

8 Tips for Creating an Ideal Home...