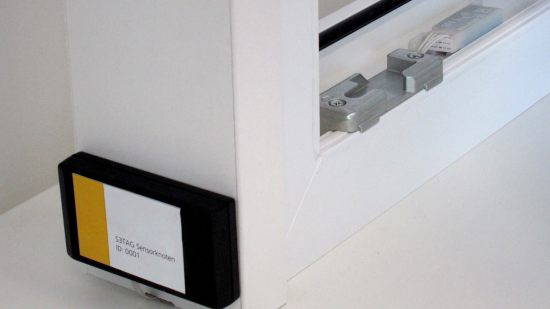 If you are always worried about the windows of your home being left open or cracked by some bad guys while being away, here is some good news for you. A new sensor system developed by researchers at the Fraunhofer Institute for Integrated Circuits IIS, in collaboration with Calw-based Seuffer, can detect if windows in your home are opened, wide opened, cracked or closed. The sensor system then transfers the data to the base station at the main door, which could be a tablet, smartphone or a room controller. Moreover, the sensor system that’s fixed on to window frame sends the data remotely, which lets homeowners keep a tab on their windows via smartphones.

The window monitor has been developed upon HallinOne sensor, a 3D magnetic field sensor by IIS, which is already being used in washing machines to identify the accurate position of the drum. The sensor is the size of a fingernail and is attached to the inner frame of the window. It finds the handle and sash positions by checking the position and angle of a magnet attached at the sash bottom. The sensor nodes integrated in the window frame sends the data via the s-net wireless sensor. The sensor system is tamper-proof and gets its juice from energy harvesting technology that generates power from various sources, such as ambient heat, sunlight, vibrations and air currents.

The 3D sensor also gets its power from solar cells and thermoelectric generators fixed to the windows. For now, they have developed a prototype of the window featuring the sensor, solar cell, RF node and magnet. Mass production of the wireless sensor system is expected by the end of 2012.

Is time to update your bathroom?

3 Reasons You Should Invest in a...