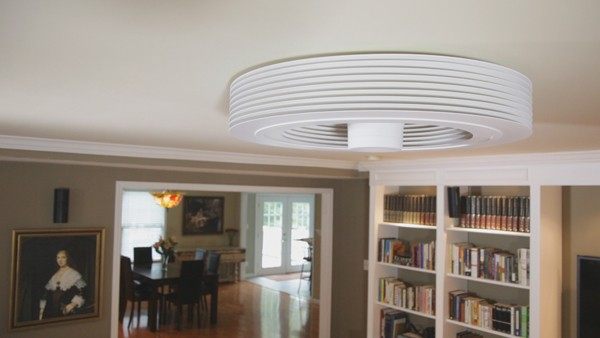 It’s never easy and takes guts to reform something that has remained basically the same for years. Enter Exhale Fan, a new spin on the design and functioning of a ceiling fan. Designed by Nik Hiner, in collaboration with Richard Halsall, looks and works differently from a regular ceiling fan. Nikola Tesla, the 19th century inventor, inspired Hiner to create the bladeless ceiling fan. Unlike normal fans that direct the air straight down, the Exhale fan makes the air move around the room in a 360-degrees horizontal flow.

The bladeless fan works on the science of laminar flow. The flat discs on the Exhale fan spin to create a laminar movement to move the air down the walls. This process circulates the air orderly and evenly throughout the room to regulate the temperature with a clam breeze. When the air molecules complete the cycle around the room, they go back to center of the fan in a vortex pattern.

The Tesla-inspired Exhale fan features a high-efficiency DC motor with comes with a 6-speed wireless remote. Georgetown based Exhale Fans LLC was founded in 2011.

PushTap lets you turn the power on...

Now, you can control your iRobot Roomba...

Washing machines that need no electricity to...

Break-e combines a toaster and squeezer in...