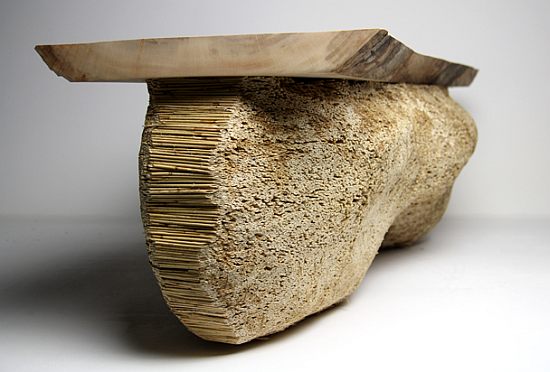 An upshot of collaboration between London based Dutch designer Els Woldhek of Whatels studio and Bulgarian designer Georgi Manassiev, the Reed’s is a zero impact table made with reeds, which have been used in construction for ages. Reeds grow almost everywhere in the world and can be used in a number of ways. The first piece in the Reeds series is a commission by a native of Giethoorn, a beautiful marshy region in the Netherlands. The side table has been made with reed grown on the surrounding land and was bought from the local thatcher, which is just 300 meters from the client’s house.

The tabletop is made with oak sourced from a local boat builder. The supporting structure of the table has been done completely in water reeds. Following a local practice, the reeds are tied together in bundles and are then trimmed and padded to achieve the final shape. The complex pattern of the circular cuts bestows the creative Reeds table with a unique, inviting appearance.

Cat Tunnel sofa lets you and your...

Top 10 Sofa Designs Without Pinching Your...

Coffee table made from metal parts of...