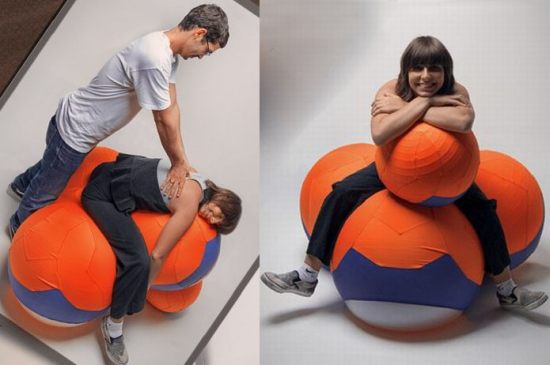 Inspired by the fact that while we may not be physically tired, we could possibly be mentally exhausted, Brazilian designer Bruno Pagnoncelli has conceptualized the “Molecula” furniture. The Molecula has designed with the prime focus on interaction between object and user and relaxation. The playful furniture unit can be used in many ways, such as for a hot love making session as proposed by Bruno Pagnoncelli. The Molecula draws inspiration from atomic structures and flaunts a minimalist, fun shape based on an adaptable nucleus and an electron.

The use of nylon resins makes it easy to clean and you get a wide range of colors to match complement your existing décor. The Molecula furniture is said to hit the stores as a kit, which will include four Swiss balls, an air pump and the fabric cloak.

Simple ways you can hide scratches on...

Design your own generative Voronoi bookshelf with...

The Cloud House is a rocking chair,...