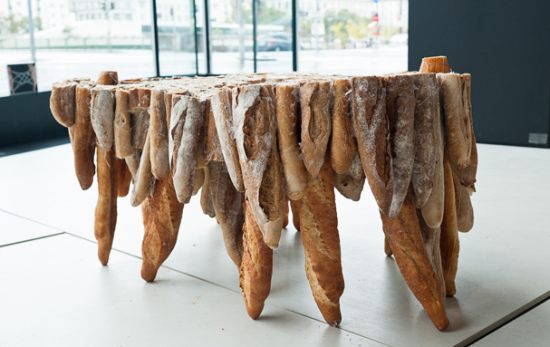 Inspired by the study that the food thrown away in Vienna could feed half of the population of Graz, Studio Rygalik designed the Baguette Tables with an aim to initiate a debate about food waste. The project also aimed to focus on the use of materials that surround our daily lives. The Baguette Tables are made from the stale baguettes, the long thin loaves of bread, which were supposedly meant to be thrown away as waste. A part of “bread experience”, the Baguette Tables were made by Gosia and Tomek Rygalik at the Vienna Design Week Laboratory.

DesignBoom notes that while the exposed ends of the baguettes have been leveled to create the table tops, the longer pieces become the multiple legs to offer support and a visual appeal.

Cool and functional stool designs for your...

Bespoke Furniture: what’s all the fuss?

DogiBag takes the stress out of traveling...