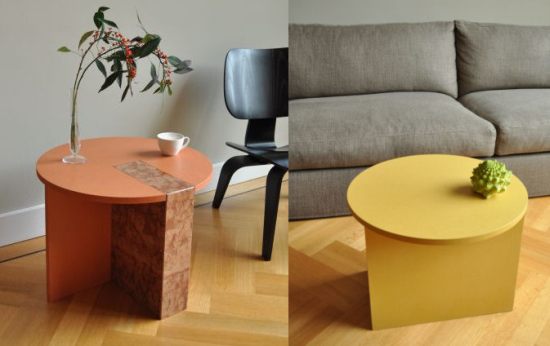 OS and OOS, the studio founded by design graduates Oskar Peet and Sophie Mensen in the autumn of 2011, has made a series of nine small tables dubbed “Coloring Tables”, divided into three subgroups characterized by their colors – yellow, red and gray. The design studio was asked to create commercial products in three different price categories, with the cost increasing with the addition of a new material, starting with wood, metal and marble respectively.

The least priced table is made using colored MDF wood only and it works as the base for the rest two highly priced tables. The second table uses two diverse materials in same texture. The most expensive of the three tables is made using three different materials of same color. The idea behind the creation of this series of tables by OS and OOS was to ask the differences users can interpret from the three tables that bear different price tags but perform the exact same task.

Lego inspired furniture to brighten up your...

Ex-prisoners get back to the social world...

Expandable ‘Between the Lines’ coffee table by...