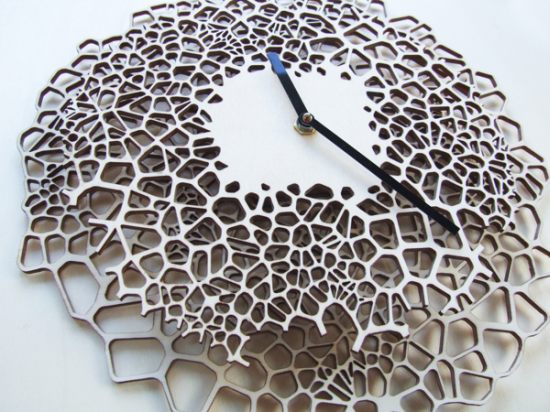 Last time, we introduced you to a Voronoi-inspired bookshelf and now, we have the Giraffe Clock that is based on the Voronoi algorithm. A Voronoi diagram is a method of dividing space into different regions. The inspiration for the Giraffe Clock came from the intricate patterns, such as the spots on giraffes, microscopic image of a leaf or the pattern of a turtle shell. These patterns follow a simple mathematical formula and are called Voronoi.

Designed by Anja Verdonk, the Giraffe Clock features laser cut Voronoi cells and a black sanded wooden side, which accounts for the attention-grabbing depth and contrast. Priced at $90, the Voronoi Giraffe Clock makes a soft ticking sound.

Why you should have a house with...

Turning a Fish Tank into a Home...

Tips to decorate your bachelor’s pad without...

Ideas to decorate the living room of...

How to make your home stylish with...

Home decoration trends that have lasted through...

Transformation of a plant pot from Japan...