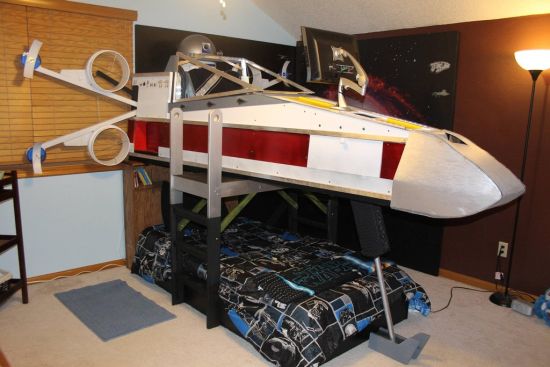 Geek father builds an amazing X-Wing bed for his son

We have already heard of geek dads making spaceship beds and surveillance helicopters for their sons. This time, a geek father has built an incredible X-Wing Bed for his lucky son and that is going to make many kids envious. Built by Imgur user DarthDaddy42 for his son, the amazing X-Wing bed is huge and its wings can be closed and opened into attack mode via remote.

If that was not enough, this geek dad also fitted in an HDTV and a Blu-ray player sitting discreetly in a cubby within the nose of the X-wing, so that the luckiest kid can watch Star Wars episodes from the cockpit. Without doubt, there are certain benefits of having geek parents.

Willeke Evenhuis’ Tally side table made from...

ADAPTable lets you customize your workspace to...