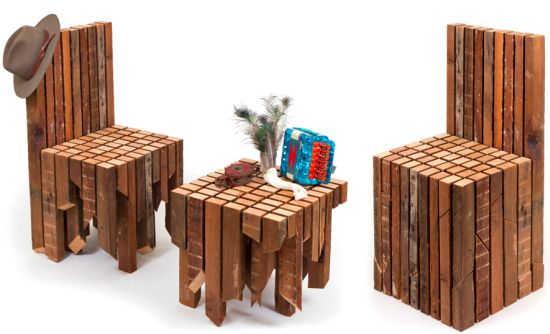 After the Ferruccio Laviani’s Good Vibrations storage unit, here is yet another interesting example of furniture design that will blow your mind. Designed by Brooklyn based artist and designer Dave Rittinger, the Mate chair and side table combination concept is a functional interlocking sculpture, with the two pieces stacking into a single unit. When separated, both the chair and the side table appear to be a total chaos, but when stacked together, you get to know the ingenious idea behind this crazy design.

The monolithic block of 2×3 planks has been crafted from reclaimed lumber. Rittinger cites that while the original idea was to split each piece by jumping on it to create breaks suggestive of a natural splintery fragmentation, he settled on opting for all clean cuts, which makes for accurate nesting of both the sections. The Mate furniture set, being a prototype only, will never make its way to your living room.

How to arrange your bedroom furniture perfectly